I’ve had tradies in for weeks, so haven’t had a chance to felt. Having a rare bit of quiet time the other day, I thought ‘why not give crocheting another go?’ After about 8 videos, I remembered why! I did manage to make some things you could loosely describe as chains, though:

I thought felt and knitting were hard to photograph, until I tried to photograph crochet! All these photos have been redone at least 3 times. I thought I might have better ‘luck’ if I used some commercial yarn instead of my handspun superwash which spun about as well as it felted. I also looked for a better video, and finally found someone who spoke slowly enough for me to understand and had a really clear explanation:

So with some commercial Aran wool and a new video, I made a neater single chain: 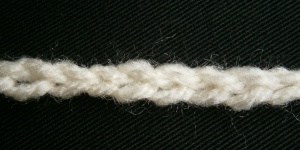 The thing I’d had most trouble with on other videos was their explanation of how to do the next row, which stitch was the ‘second stitch’ etc. Luckily, Lesson 2 was SO clear, I did it first time:

My samples weren’t perfect, but much better than my first chains!

I thought I’d try it with the pencil roving I was using for knitting:

But, what now? I don’t know what the next part is called so couldn’t find a video for it. How do you do a 3rd row? Turn it over and do the same thing? It didn’t look the same, but I gave it a go: 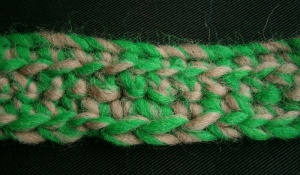 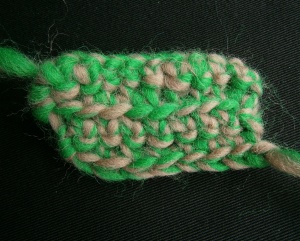 Is that right, how it’s meant to look? If you have any tips for what I need to know next, I’d be grateful! So, wanting to keep practising my new ‘skill’, but not having a clue, I thought I’d freestyle it:

Yeah, that is some kind of small crochet bowl! I wondered if I might be better at bigger crocheting, like I am with chunky knitting. So yesterday, I made myself a chunky hook, here it is next to the size 4 one I was using:

It needs a bit more sanding and maybe a bit of beeswax or something, but I had a go and made a chunky sample: 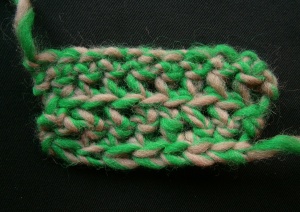 I am now going to enjoy the first peace and quiet for weeks, by clearing a space to do some felting! Any crochet tips greatly appreciated!!

18 Responses to Learning to Crochet