Printing and Stenciling on Felt Part 2

Posted on November 4, 2017 by Marilyn aka Pandagirl

The first thing I did this week was felt the three feathers onto a another larger piece of prefelt. I didn’t loose a lot of color, but some of the definition was lost especially on the yellow.  I will probably embellish this at a later time. 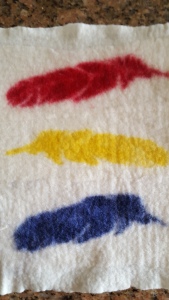 I also made four large merino felt pieces to use stamps and found objects on.  I made several stamps and cut out a couple of stencils from Mylar.  Here are some of the found objects. 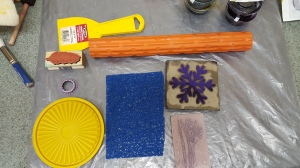 I don’t know what the orange thing is, but I bought it Kohls on clearance a while back.  There’s a scraper, bottle top, leaf stamp, tupperware lid, a piece of what I think was a vegetable tray liner, a felt ornament I glued onto a ceramic tile and a reverse stamp I had made out of clay a long time ago.  I won’t show the other stamps since its proprietary to Ruth’s class material.

I started with lighter colors like yellow and continued to try new stamps and objects with different colors and thicknesses.  I really had difficulty getting good prints. Its probably the operator and not the materials or classwork.

I had made one stamp with shapes another with leaves.  I basically painted the dyes on to get a decent print with some texture.  you can see them in teal and blue.

I used a commercial bird stencil with black and green dyes on the purple prefelt I had made.

It was unknown fiber and would stick to the stencil brush or foam brush.  You can see the fiber standing up in the second pic.

Then I had made a mylar stencil of a cat and stenciled that on a piece I had done last week.  I will felt that  and the birds later.

We were also encouraged to try printing on paper.  I have a bunch of handmade paper from my papermaking days, so I tried the felt snowflake again and got a good print, then went around the edges using up the dye and giving it a bit of texture for a background.

I set all the pieces except for the large piece and the paper. I also included the flower piece from last week.  Surprisingly it bled and I couldn’t wash it out.

I was very disappointed in this since it looked so nice before setting the dye.  I’m not sure what to do to fix it.

16 Responses to Printing and Stenciling on Felt Part 2