I’m continuing on with some experimentation on how three-dimensional shape in felt is influenced by different factors. This time, I am using a resist with a layer of prefelt which is cut in a certain manner and then added to a thin layer of laid wool over the same resist. The differential shrinkage of the two layers creates the shape. I learned of this technique from several discussions on the forum that we had about creating sea shell shapes.  One of our members suggested that we look at this blog: www.parallelfunk.de/ She has a series of photos of the steps that I will go through below. Scroll down on her blog to find the relevant blog posts.

I decided to try a seed pod type of shape instead of a shell. The first step is to make a fairly thick prefelt. I decided to use a green batt that I had made some time ago. 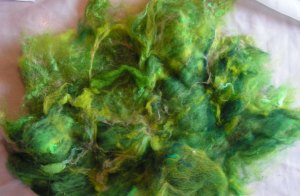 The batt was actually really thick so I pulled it apart into two layers. I ended up using only one layer so I have enough to try a different shape. I used a small circle of floor under layment for the resist. 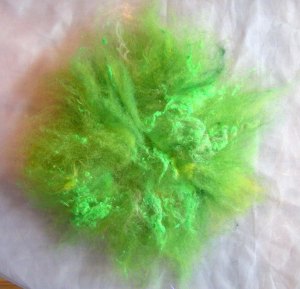 I covered the resist with pulled apart batt in a radial fashion. I wanted the embellishments to run the correct way on the finished pod. You will see how this works when I cut the prefelt off the resist. I wet down the wool, flipped it over to the other side and folded the ends in. Then I covered the other side with wool in the same way. I used two layers of wool on both sides of the resist.

Here is the covered resist ready to felt. I felted in my usual fashion by rubbing with soapy hands. I generally don’t cover the felt with anything except when I wet down I use a sheer nylon curtain just to hold everything in place. We do get quite a few questions of how to avoid a ridge at the edge of the resist. I avoid this by not rolling. I also carefully rub the felt so it pulls the felt inward against the edge of the resist and doesn’t felt against itself. Wool has a tendency to spread out when wet down. This causes the edges not to be pulled tight against the resist. I counteract that with rubbing in towards the center of the circle and making sure that the ridge never forms at all.

Here’s the prefelt after I finished rubbing. It is just barely starting to shrink on the resist and it is holding together well. Now it’s time to cut it open. Depending on what shape you want to create is how you decide how to cut the prefelt.

I cut the circle in half on both sides of the resist. You can see that the silk embellishments will be following the shape of the “pie pieces” when I get them all cut.

I then cut one side into six “pie pieces”. I just eyeballed it since I wanted to end up with an organic form, I wasn’t worried about exact symmetry. Then I flipped the prefelt over and pulled out the edges of the flaps so I could see where to cut on the back side. The photo on the right shows the pieces completely cut with a few flapped open. 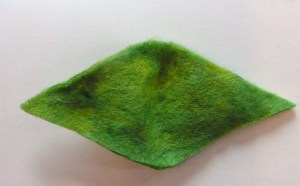 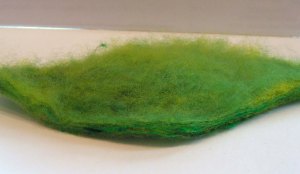 The inside of the prefelt needed to be roughed up so that there were lots of loose fibers. So I used  a felt brush that I had to roughen it up. I did also try using a fingernail brush which worked just as well.

I then covered the same resist that I used for the green prefelt with black wool. I used only one layer and it was pretty thing. Just thick enough so I wouldn’t end up with holes. 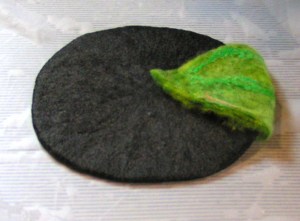 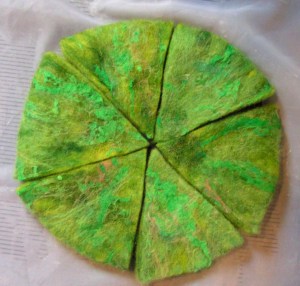 The next step was to reapply the prefelt over top of the resist that was covered with the thin layer of black wool. Then to wet down and begin gently felting. 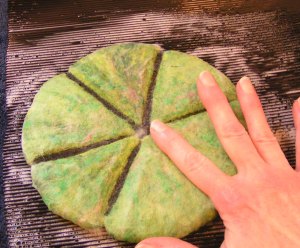 I used cold, soapy water and worked slowly and gently. I rubbed a lot along the edges of the prefelt and along the edge of the resist where the black wool needed to attach to the green edge. I gently placed my  hands over the entire piece and made a rocking motion back and forth with increasing pressure downwards on to the ridged rubber mat. I continued to alternate rubbing and gentle downward rocking. I gradually increased the pressure and rubbing friction until the entire piece was holding together and the green prefelt was adhering to the black wool.

The piece was beginning to shrink and you can see that there was an almost floral shape emerging instead of just a circle. 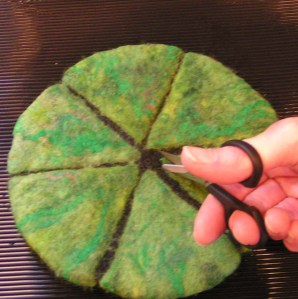 I picked which side I wanted to be the open top end of the pod and cut a very small hole in the black felt. I removed the resist and began fulling and shaping. I have a problem taking photos during fulling as I am using both hands and get absorbed in the process. I did most of the fulling by pulling the pod from open end to closed bottom end and then rolling it over the ridged mat. I added hot water and rolled it in between my hands as well. I did a bit of holding my finger inside and rubbing the green felt lengthwise but not much. The shape actually nearly created itself. Hopefully, when I try the next one, I will get more fulling photos. 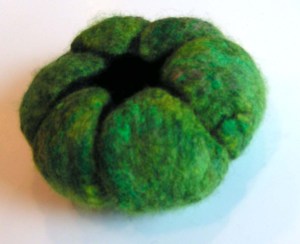 The pod can actually be at least two different shapes. This is more rounded and looks more like a bell pepper or perhaps a sea urchin. 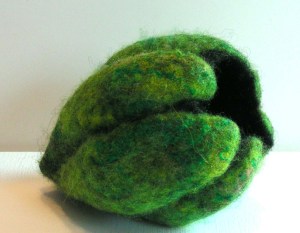 I actually like it stretched out more like a seed pod as shown in the photos above. So I dried it in this shape. I fulled the felt hard and it holds its form easily. The reason this works so well is that the thicker prefelt doesn’t shrink in the same way as the thin layer of black wool. Therefore you get the curved pieces of the green creating the organic pod shape.

I am going to try another one cutting the outside prefelt into a different shape and I will show you that soon.

This entry was posted in 3D, Prefelt, resists, Wet Felting. Bookmark the permalink.

34 Responses to Influencing Shape with Prefelt