I’d promised a mate I’d do a painting for him. He liked a couple of pics that I showed him, but I wasn’t sure they’d work on canvas as the technique is better suited to paper. I thought about doing something different, but really didn’t want to, so started trying to think how I could get the technique could work. I wondered if I might be able to recreate the ‘look’ with a piece of felt, he likes funky fabrics and wall-hangings so it might be even better than a canvas. We’ve used artists and paintings in Studio Challenges and I’ve copied a painting before and liked how it turned out. So, I thought it was worth a try. These aren’t the exact pics I showed my friend, but I didn’t want to do a copy, I just wanted inspiration:

The idea I had in mind was from another painting I’d done, similar in technique, but more structured in columns and blocks. I can’t find the painting and it didn’t have the scribbley ink layer underneath, but these were fine for inspiration. They’re built up of layers, with the scribbley ink as background, then just a few colours used, but overlapped to create more colours, this is just yellow, pink and blue, but has orange, red and indigo from overlapping: 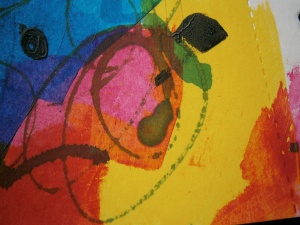 I started with blocks of colour, I chose them carefully and positioned them so they’d stay bright and not get dulled by overlapping:

I used some Nylon tops and silk threads to replicate the inky scribbles. I didn’t want to overdo it though. I put wisps of wool over them. To get the effect of overlapping colours and to soften the shapes a bit, I used mostly dyed Nylon Staple fibres. I’ve dyed heaps of this so have lots of shades. I used colours from adjacent wool patches and in places blended fibre colours together. I also used some trilobal nylon, silk throwsters waste, dyed viscose staple, and other dyed cellulose fibres for more interest and some shine 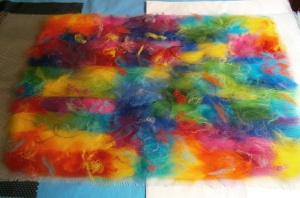 Giving it a good look over before felting I thought a few areas could do with a ‘lift’, so I added some fibres in contrasting colours too: 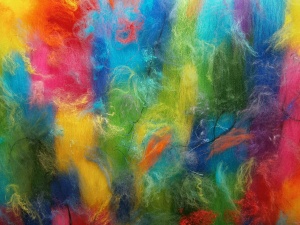 I like how it turned out, though this is ‘upside down’ compared to the layout pics: 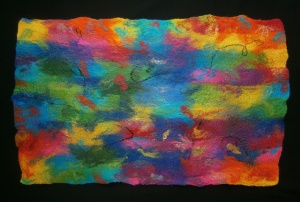 The Nylon staple worked well to ‘blend’ the adjacent colours and the shinier fibres gave it more depth: 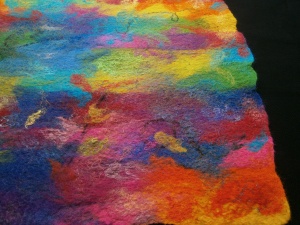 And, I had to get some close-ups, of course! This is Trilobal Nylon, I used this sparingly, I didn’t want too much ‘sparkle’: 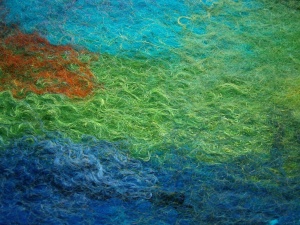 A silk thread under some blue nylon staple fibre:

And some Viscose staple fibre:

16 Responses to Felting a Painting